Symphony No. 5 – Freedom From Fear

Symphony No. 5: Freedom From Fear - Images From The Shoreline was commissioned as the 2017-18 Legacy Project by Reach Out Kansas, Incorporated for the University of Kansas Wind Ensemble (Paul Popiel, director) and Jazz Ensemble I (Dan Gailey, director). The work pursues a programmatic idea that centers on displaced peoples and the global concept of Freedom from Fear - one of the Four Freedoms Franklin Delano Roosevelt spoke of in his 1941 United Nations inaugural address. FDR's Four Freedoms became so emblematic of the United Nations that they were added to its Universal Declaration of Human Rights. This Symphony is unified by the concept of Freedom from Fear as it impacts displaced peoples. Each movement is exemplified by an image connected to a shoreline (refer to the extended program notes below). The large work combines wind ensemble with jazz ensemble and features a Soprano soloist and Boy Soprano soloist. Symphony No. 5: Freedom From Fear - Images From The Shoreline received its premiere on April 18, 2018 with a repeat performance at the Kennedy Center for the Performing Arts in Washington DC on April 29, 2018.

1. The Relinquishing
2. Sands of White and Black
3. Lullaby
4. Sea Crossings – Mother of Exiles 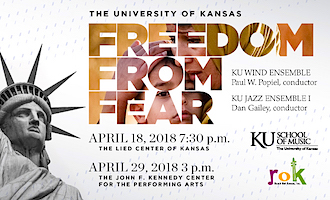 At the Kennedy Center

The relinquishing of Moses demonstrates the Courage of Jochebed and the gift of life she gives to her son and the Freedom from Fear she gives to herself and her daughter, Miriam. The adopted become displaced and this relinquishing act becomes profoundly personal for me since I am adopted, as were my siblings, and my two children. The lyrics sung by the woman and child in this movement speak to Courage and Freedom from Fear. While the lyrics do not reference the account of Moses per se, the concept of adoption speaks to displaced persons on a very personal level. The opening movement establishes the melodic and harmonic motives derived from the ciphered words, Courage and Freedom from Fear. These motives return throughout the symphony to unify the work.

We have silenced the drums of Topheth’s furnace and denied the scourge of Molech’s crimes. Fear not! Have courage!

Stand fearless before the roar of oceans…and the swelling pride of the mountain’s quake.
Take refuge and strength in the sacred haunt’s river of joy. Turmoil has filled my heart. But You love me and You have taken my hand! You are the strength of my heart;
You are mine forever! Take me into Glory!

I shall not fear! I’m strong! I have courage!
You are with me. You won’t fail nor forsake me.
Do not fear! Be strong! Be courageous!
I will be with you. I shall neither fail you nor forsake you.

2. Sands of White and Black

This movement is a musical ‘couplet’ with two images from the shoreline unified by the concept of segregation. The first is based on an image published in a September 1943 Life magazine article, entitled Three Americans, depicting the battle of Buna-Gona in the South Pacific. It was the first image of dead Americans that President Roosevelt allowed to be published during World War II. Courage is displayed when soldiers fight to preserve the freedom that others seek to oppress. I see these Americans as displaced; soldiers left on distant shores, willing to sacrifice their freedom – willing to face fear so that others may live without it; struggling with a foe driven by conquest, discrimination, and segregation. I have ciphered two phrases from the article, Three Dead Americans and Three Units of Freedom, to serve as the principal pitch structures in this movement.

The second concept of this movement, the Battleground for Civil Rights, depicts protesters of the segregated beaches in Biloxi, Mississippi who participated in “wade-ins” in an effort to desegregate the use of public beaches. Segregation causes the displaced peoples here. Less than 20 years separates the battle of Buna-Gona with the early wade-ins of 1959 and, later, the violent wade-ins of the early 1960s. I have used the Civil Rights anthem, We Shall Overcome throughout sections of this movement and, to speak to its Mississippi locale, have incorporated an abstraction of Delta blues. The movement’s title represents the fight for Freedom from Fear: white soldiers fighting segregation on the black sands of battlefields in the South Pacific and black soldiers of the Civil Rights movement fighting segregation on the white sands of home.

This movement takes its inspiration from the image, Humanity Washed Ashore and the tragedy of those killed fleeing war in Syria. This image is of 3-year old Aylan Kurdi, but his 5-year old brother, Galip, and his mother, Rehan, also lost their lives when, in their attempt to flee as refugees, their boat capsized before reaching the Greek Island of Kos. In this movement, Freedom from Fear manifests itself in the Courage required to relinquish one’s homeland and extended family, while risking life in order to seek peace.

The movement takes its title from the Syrian folksong, Sleep, My Child, which is a folk song stemming from Aylan’s home of Aleppo. Some lyrics and brief melodic motives from a second Syrian folksong, Upon Thy Lovely Lips are also incorporated. I have ciphered the brothers’ names and the lyrics, Sleep, My Child into music pitches, which are used, along with elements of the folksongs, to create melodies, harmonies, and modes. A boy soprano sings in this movement as a representation of Aylan, and a soprano represents his mother, Rehan; a musical conversation occurs between mother and child. The lyrics of this lullaby speak to the tragedy of this image, not focusing specifically on the Syrian civil conflict since Aylan’s story transcends Syria’s present conflict and speaks to the Freedom from Fear facing all refugees.

Lullaby utilizes an abstraction of Syrian music by emulating Syrian instruments, the Qanun, Arghul, and Ney and the specific tunings associated with those instruments. The middle of this movement features an intense jazz-like feel that incorporates the rhythmic elements and variant forms of the Syrian Muwashshat – a musical form that, evolving from Arabic poetry, is popular in Aleppo where Aylan’s family originated.

Peace, in Him, my pretty one, and softly dream.
Beneath His yoke thy soul shalt rest, and refuge seize.
Where forever more shalt thou reign.

I’d lose my soul without a pang, what do I care since thou art mine.
‘Twas not thy hand in Molech’s fire, consigned to flames, my soul’s desire.

Peace, in Him, my pretty one, and softly dream.
Beneath His yoke thy soul shalt rest, and refuge seize.
Where forever more shalt thou reign.

As a beacon of hope, the Statue of Liberty (Mother of Exiles) gives the displaced the Courage and Freedom from Fear to relinquish their homeland and start again, adopted by their new country. In this image, a ship, arriving in the New World, is filled with immigrants with Lady Liberty in the background. And, similar to Moses’ story of relinquishment and adoption in the first movement, and Aylan’s journey in the third movement, these displaced peoples leave their homeland, cross the seas, join millions of others displaced by fear, and seek refuge in a new, adopted homeland.

Portions of the sonnet, The New Colossus – penned by Emma Lazarus and inscribed on Lady Liberty’s pedestal, along with the words Mother of Exiles and Courage, are ciphered into pitches used for the entire movement. The Soprano soloist, representing Lady Liberty herself, intones those distinguishing words from the sonnet, summoning those from distant lands who would answer her call. The Courage motive, featured throughout the entire work and beginning with the entry of the Soprano here, permeates the second half of the symphony’s final movement and builds to a powerful conclusion by suggesting the arrival of new immigrants on Lady Liberty’s shoreline.

Give me your tired, your poor,
Your huddled masses yearning to breathe free,
The wretched refuse of your teeming shore.
Send these, the homeless to me, your tempest-tost to me,
I lift my lamp beside the golden door!
All oppressed may enter here,
A refuge in times of trouble.

Symphony No. 5 – Freedom From Fear  ::  Images From The Shoreline is a grade 6 work. It is challenging to college and professional level wind/jazz ensembles.