Symphony Number 3 - Quintet Matinee was composed as a result of winning the 9th annual Raymond and Beverly Sackler Music Composition Prize. Composed specifically for the University of Connecticut Wind Ensemble, directed by Dr. Jeffrey Renshaw, and the Atlantic Brass Quintet, Quintet Matinee uses two contrasting interval cells that comprise the work's entire melodic and harmonic structures. The work contains nine tableaux of various dramatic characteristics and musical styles that showcase the unique performance abilities of the Atlantic Brass Quintet. The eclectic nature of the work includes the fusing of concert music techniques with jazz improvisation and vernacular music attributes, including hip-hop, blues, rock, Latin, and funk. Quintet Matinee achieves its title by adapting its limited melodic content to various styles in dramatic, underscore fashion and tracing its transformation through the story-telling protagonists of the brass quintet. 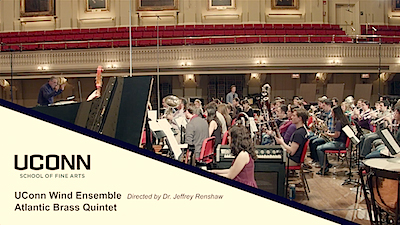 View the promotional video of the CD release Quintet Matinee featuring the works of Kevin Walczyk, Andrew Sorg, and Earl MacDonald. the CD promotes the Sackler Composition Prize and the University of Connecticut Department of Music faculty and students as well as the Atlantic Brass Quintet.

Symphony Number 3 – Quintet Matinee contains 9 tableaux that are performed without interruption. Tableau 1 presents the work’s principal melodic motif – comprised of the more consonant interval cell, in the wind ensemble and serves as an introduction to the brass quintet’s initial entry. The second half of the first tableau integrates the quintet with the wind ensemble in a somewhat labored, dance-like variation of the principal motif. The brighter paced Tableau 2 features the quintet performing long, lyrical presentations of the principal motif against an energetic and rhythmic accompaniment. Tableau 3, labeled funky, features the dissonant second interval cell and utilizes rhythmic and harmonic-voicing techniques associated with jazz-rock fusion. Tableau 3 is interspersed with solo improvisations by Atlantic Brass Quintet trombonist, Tim Albright.

A transition slows the pace to the tender yet, haunting Tableau 4 that features the Atlantic Brass Quintet’s Seth Orgel on horn. The melodic and harmonic constructs of Tableau 4 are generated from both interval cells and their respective complementary intervals, which give way to wider, more angular intervallic leaps. An intense, mechanical section serves as the outsets of Tableau 5. Between them a driving jazz-rock section reprising Tim Albright as improviser, and an abstract hip-hop blues section featuring improvised solos by trumpeter, Andrew Sorg. Albright and Sorg alternate solos and, ultimately, join forces by soloing simultaneously. The dark, mysterious nature of the Tableau 6 features the low register of both the wind ensemble and the Atlantic Brass Quintet’s tubist, John Manning. The melodic and harmonic structures are, once again, obtained through the employment of both interval cells that birthed the entire symphony. The exploration of unique timbres and non-metered passages in the accompaniment provide a murky backdrop for the tuba’s recitation.

Tableau 7 inconspicuously shifts to a solemn and optimistic passage whose lyric and expressive qualities are derived from the work’s consonant interval cell and intoned by Atlantic Brass Quintet trumpeter, Louis Hanzlik. After a solo flute brings the Tableau 7 to a close, the quintet accelerates the work to the intense Tableau 8, which features symmetrical, octatonic scales and matrices – all derived from the work’s two interval cells. Tableau 8, with its use of intense jazz-rock passages pitted against frenetic and dramatic passages, serves as the works climactic finale. The brass quintet provides a moment of gentleness in the middle of Tableau 8 but capitulates to the intense character that preceded it. Tableau 9 serves as the work’s coda and, after a brief fanfare by the quintet, concludes with the principal melodic motif in a stately and declamatory manner.

Composer Kevin Walczyk was named the recipient of the ninth Raymond & Beverly Sackler Music Composition Prize. The competition, organized by the University of Connecticut’s School of Fine Arts, supports and promotes composers and the performance of their new musical works. An international award, the prize offers a substantial recognition including a commission of $25,000 to compose a work for a specific ensemble (which changes each year), public performances, and a commercial recording. The 2012 prize is for a concerto for brass quintet (Atlantic Brass Quintet) and wind ensemble. Walczyk was chosen from among 65 entries from 10 countries and 12 states. Finalists included Justin Dello Joio (New York, NY), Augusta Read Thomas (Chicago, IL), and Roshanne Etezady (Evanston, IL). The 2012 adjudication panel was comprised of Edward Cumming, Tayloe Harding, and Tom Ervin.

Symphony No. 3 – Quintet Matinee is a grade 6 work. It is challenging to college and professional level wind ensembles. The Brass Quintet requires improvisation in the trumpet 2 and trombone parts.